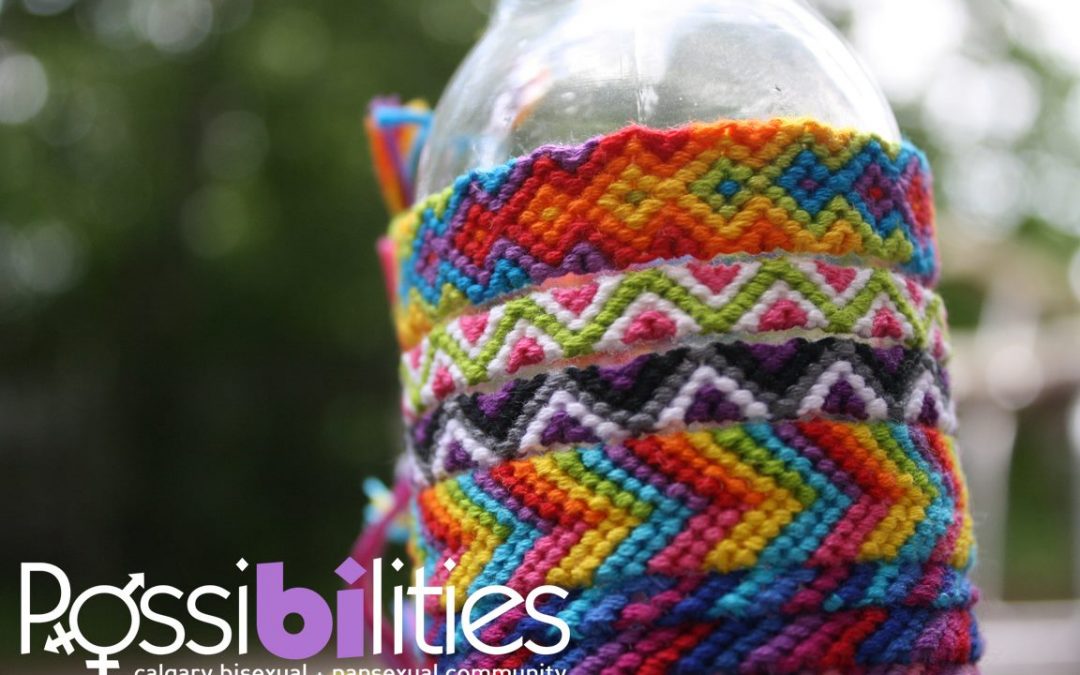 Possibilities Calgary is relaunching! Over the next couple weeks, you’ll see the About pages updating on the Facebook, the MeetUp, and Twitter. The posting for the first event will be going up tomorrow, and the event itself will happen in April. The first blog post will be up the first week of April. (You’ll even see a dedicated page on tiffanysostar.com, but not quite yet.)

First, some history. Then, some FAQs (the questions I asked myself most frequently when planning the relaunch).

At the time, there was no cohesive community in Calgary for bisexuals.

This is not unusual, since the bisexual community is chronically under-supported. The lack of support leads to, among other things, increased risk of intimate partner violence, under- and unemployment, significant rates of poverty, and poor mental health outcomes. (For a comprehensive look at the issues, read the 2011 Bisexual Invisibility Report, or, even better, read Shiri Eisner’s fantastic Bi: Notes for a Bisexual Revolution.)

I wanted community, and I couldn’t find it, so I built it. I had support from my Women’s Studies professor, Fiona Nelson. I met with community leaders to learn how to organize queer and feminist community in safe and effective ways. I had an amazing group of people to help me, and the Possibilities board was such a phenomenal support.

In that time, we expanded to include the asexual community (zero is not one, and so our ace friends fit under the non-monosexual umbrella comfortably!), and to include the transgender community (particularly the non-binary and transfeminine communities). There are trans members of every orientation – gender identity and sexual or romantic orientation are not the same things – but we found that those folks at the intersection of trans and non-monosexual identities were particularly and uniquely marginalized, and that Possibilities could help. For the last year of Possibilities, we had an offshoot community in Translations, which focused on transfeminine experiences.

We hosted three BiBQs during Calgary’s Pride week, and two Probabilities: Queer and Feminist Gaming Conventions. We also partnered with Calgary Outlink to host a monthly Community Café, which was a gender- and orientation-inclusive space. And, one of my personal highlights, we ran the UnConference series, bringing in speakers for multi-day events (including the hugely successful co-hosting of Courtney Trouble with the University of Calgary’s Institute for Gender Research).

Brittany says, “The BiBq was a super chill thing that I miss!” and Jocelyn confirms, “Get togethers involving food and convo” were a favourite feature.

Sid, a former board member says, “I got the opportunity not just to have my own need for support and community met but that I was also in an environment that gently encouraged me to explore how I related to other axes of oppression. Also, I always appreciated the constant supply of tea.”

Our intersectionality developed and grew over time, and although it was always imperfect, it was sincere. Rachel says, “I felt incredibly safe there.”

Michael, another former board member, says, “I really appreciated the sense of belonging to a community, and the ability to learn and grow from a group of amazing people with diverse life experiences.”

Scott, also a board member and facilitator, says, “I am not a word smith. I don’t have words beyond it was community for me. It felt inclusive and supportive.”

Jonathan, who helped me with the founding of the group, says, “Possibilities helped me learn more about how my newly discovered queer identity fit within a community. It enriched what would otherwise have been a much lonelier journey.”

It was good. It was so good. And it was needed.

But in 2015, a significant percentage of the board had moved on to new cities or new projects, and I burned out hard. Physically, emotionally, financially – I was tapped. The board members who remained continued to work hard, and new volunteers stepped up, but the organization was struggling. We couldn’t keep going. After major soul searching, we admitted the truth. Possibilities was on hiatus.

In 2016, I looked at restarting Possibilities, but realized that I didn’t have the resources to make it sustainable for myself. It hurt, but we stayed on hiatus.

But yesterday was the first day of Spring, 2017, and it was time for this seed to grow again. And so…

Why am I relaunching Possibilities now?

How am I going to avoid burning out again?

Friendship and magic? No, but seriously, I am hoping that two years of learning better self-care skills will help. I am also going to make it easier for people to support the work, and am tying it directly to my self-care and narrative work, which leads us to…

What will the relaunch involve?

I am making two commitments in this relaunch effort – one blog post or article per month, and one in-person “self-care for the b+ community” meeting. I don’t know if the BiBQ, or the gaming events, or the UnConference series, or any of the other major projects we were involved with will come back online, but I’m also not going to worry about that yet. By tying the work explicitly and intentionally to my self-care resource creation, this iteration of Possibilities fits beautifully into the work I’m doing for (and with) my Patreon. Which leads to the final question –

How can community members get involved?

If Possibilities is important to you, and you value having this community back up and running, please consider becoming a patron. That is the best way you can support this work, though I know not everyone is able. Possibilities discussion events, and the blog posts and articles, will be free for anyone, and the Patreon is what makes that possible. (Blog posts will also be available a week early for patrons, so, there’s that!) It makes me so happy to have come full circle, to have spiralled around to a new way to approach an old passion, and you can help ensure that the community stays active and vibrant going forward.

And, edited to add a link to our first event in two years!